Throwing a punch to support CF

Even though Crystal Banks was living in London when her sister’s partner received a lung transplant, she was impressed by the support they received from Cystic Fibrosis New Zealand.

Originally from Oamaru, 28-year-old Crystal has spent the last five years abroad, eventually finding her way to London where she’s been living for the past 2 years.

After competing in her first white collar boxing match in 2018, she was keen to head back into the ring and chose CFNZ as her charity to support. Thanks to her hard work and the support of many generous supporters Crystal raised over $3,000.

“My sister Tiffany met her partner Chris, who has CF, three years ago. In November 2018, Chris received the life-changing gift of a new set of lungs and had a lung transplant in Auckland. Thankfully his recovery has gone really well and he managed to get home in time for Christmas. Tiffany and Chris received incredible support from Cystic Fibrosis New Zealand including regular contact with the fieldworkers, grocery vouchers and lots of other practical support. Chris is now working and goes to the gym and I’m incredibly happy for them both.

When I signed up for my second white collar fight I wanted to support a charity that I’m personally connected with, so I chose Cystic Fibrosis New Zealand.

My fight was on 21 June at Troxy which is an old theatre with a mezzanine floor in Limehouse, London. There were two rings set up, 2,000 people watching, a DJ, commentators, smoke machine and flashing lights.

I was the first person to walk out onto the ring, through the smoke and with the song ‘Whatever it Takes’ by Imagine Dragons playing. Walking down to the ring past my family and friends I couldn’t stop smiling. My Dad had surprised me earlier in the week and had flown over from New Zealand to watch – I had no idea he was coming over. Two cousins from France also flew over and I had lots of friends also come and watch. It was incredible!

The match had 3 x 2-minute rounds that felt like the longest 2 minutes. My coach Jamie was my cornerman and was a huge support on the night, yelling out what shots to throw and talking to me during each break. At the end of the fight, and after an anxious few minutes waiting to find out the results, my arm got raised – I had won!

This was my second white collar fight and White Collar Boxing London, the company I’ve been doing the fights through have been amazing. I’ve always loved exercise but when I moved to London I wanted to try something different. The trainers I’ve had have always pushed me to my limit, but I love it. Through boxing I’ve been able to push myself to become fitter and stronger and it’s given me the confidence to completely step out of my comfort zone.”

Thanks so much for your support of CFNZ from the other side of the world Crystal! 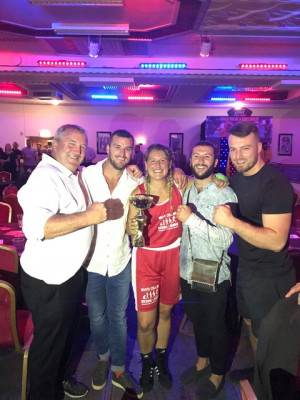 Crystal with her support team after winning her fight 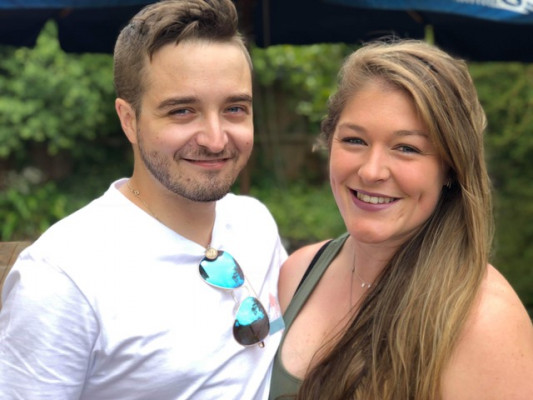