Dr Alison Wesley was a pioneer for improving CF care in New Zealand. Now retired, Dr Wesley reflects on some of the important milestones in treatment and research over the years.

It’s no wonder that Auckland paediatrician Dr Alison Wesley became a cystic fibrosis specialist given that she trained under Professor Bob Elliott - one of the leading CF researchers of our time.

Medical researcher Bob Elliott made a worldwide breakthrough in the diagnosis of cystic fibrosis when he discovered a test to screen newborns for cystic fibrosis – and his research was inspiring for the young registrar.

“It was Bob Elliott who influenced my interest in CF,” she says.

And when Dr Wesley won a research post related to cystic fibrosis in 1979 at a leading children’s hospital in Toronto, Canada, it led to a career caring for children in New Zealand.

“At that stage everybody thought there must be something different about the mucus in children with CF. Why did they get so clogged up? In fact, we didn’t find there was anything different. Now I’m not sure if it’s a problem with over-production or a problem with clearance.”

Dr Wesley brought home the knowledge from Canada: the message that attention to detail was most important in the care of children – attention to their weight, lung function and growth.

“Virtually every patient was colonised with Pseudomonas in Canada but their results were way ahead of New Zealand and a lot of the US clinics in terms of survival.

“They had a great point to get kids to grow normally. Toronto was one of the early places to adopt a new pancreatic enzyme and would say to children ‘if you just feel like eating one thing – eat two pieces’. They really monitored growth and had really good growth and nutrition.

“In England, the children were all on low-fat diets – their way of controlling the terrible bowel symptoms was to tell them not to eat fat, whereas in Canada they said eat as much as you like and their growth was so much better than the English children”. This led to Dr Wesley’s focus on diet and growth when she returned to New Zealand in 1981.

Dr Wesley was instrumental in organising the annual CF conference in NZ – and at first these were “doctors only” events with invited guest speakers from overseas.

Dr Wesley was also heavily involved in the introduction of the newborn screening programme for cystic fibrosis in 1981.

In 1991 Dr Wesley had a sabbatical to visit many CF and gastroenterology clinics around the world. These clinics also paid a high attention to detail – they were doing lung function tests, looking at nutrition, culturing sputum.

“There was also an aggressive use of antibiotics – either inhaled, oral or I/V, particularly in Leeds where they were on permanent anti-staphylococcal antibiotics. In America, they were giving courses of inhaled antibiotics,” which Dr Wesley says was something that was only just being introduced in New Zealand.

“Deteriorating growth may be an early indication of deterioration of the lungs,” she wrote in a report to the Royal Australasian College of Physicians when she returned from her sabbatical.

New Zealand was vastly lacking in resources in those days. In Auckland it was just Dr Wesley, Professor Elliott and a paediatric registrar seeing children with cystic fibrosis.

“One of the things I asked for, that was needed, was to employ a cystic fibrosis nurse specialist,” recalls Dr Wesley, and that’s what led to the appointment of Starship’s current CF Nurse Specialist Jan Tate.

“I did a paper on survival of CF patients in New Zealand and wrote to every hospital looking for information on admissions of diagnosis of cystic fibrosis. It showed that the mean survival was only 16 years but it was close to 30 in Canada. That was the ammunition that was needed to do something different,” she recalls.

Dr Wesley also became involved in the annual review of patients around the country. Seeing her young patients safely transitioned to the CF Adult Clinic was always a cause for celebration for Dr Wesley.

“It was pretty devastating to lose patients. But from when I started until I finished, at least in Auckland, we hardly lost any patients at all before they turned 18 and I could move them to the Adult Clinic. For me that was a real feeling of satisfaction,” she says.

“To me the most important thing was attention to detail – keeping the growth normal and keeping the lung function up.”

When the breakthrough CF treatment, pulmozyme, was approved for funding in 1997, Dr Wesley recalls they could only afford to give it to people most severely affected and who could show a definite benefit.

One of her best legacies is the improvement in adult services. Dr Wesley asked a colleague if he would mind taking over the care of Adult patients, and he agreed.

“It really wasn’t until some of the younger trained respiratory specialists came back to Auckland that they eventually moved all patients to a special Adult Services Clinic at Green Lane Hospital.

“There’s so much research coming out of North America and new medications but they’re so expensive that you can’t get hold of them,” she says.

After a brilliant career in CF care, Dr Wesley retired at 60 and decided to move from Mount Eden in Auckland to Whangaparaoa so she could continue her conservation projects.

“I knew I didn’t want to be in the city. I wanted to be outdoors,” says Dr Wesley (now 71) who assists with the Auckland Botanical Society. It was going for bush walks and her interest in botany which often helped her wind down after a hard week at work.

“I’d started to learn more and more about plants. And I wanted to be close to natural vegetation like Shakespeare Regional Park. I’m involved with the Shakespeare Open Sanctuary Society and we are gradually introducing threatened birds. I’m very much involved with that. Most of the things I need are up here now.” 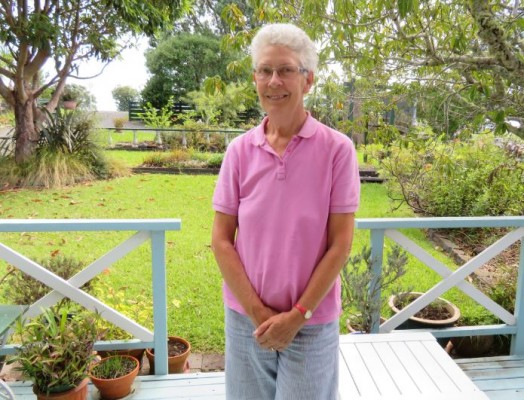