I have been fortunate to attend the 41st European Cystic Fibrosis conference on 6-9 June. The highlights for me included attending a nutrition masterclass, the special interest group looking at global consistency of CF registry data (no mean task but progress is being made) and catching up with my colleagues from CF Associations in the Commonwealth (see photo below with Nettie Burke, CF Australia and David Ramsden, UK Trust).

Certainly, the key focus of the CE's of Australia, Ireland and UK over the last two years has been campaigning for access to treatment - specifically innovative medicines. This ties in well with what our CF community sees as most important for CFNZ's future direction (as per the CF Insight Survey).

With six rooms operating four or five sessions per day and often four or five speakers per session, it's absolutely heartening to see the level of scientific research being undertaken in Europe (it’s also its pretty daunting finding your way around the venue and deciding which sessions to attend even when armed with the programme and the app). Nearly 2000 participants from 56 countries attended and the Belgrade location encouraged attendance by eastern European countries but overall showed a decrease in attendance from last year. 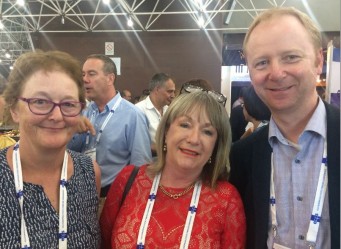